The newness and hype surrounding fuel-efficient vehicles has worn off for the media now that they’ve been on the market for so many years, but that doesn’t mean that fuel-efficient cars have stopped innovating and finding new ways to save money, use less fuel, and produce fewer harmful emissions.

The technology surrounding fuel-efficient vehicles is always moving forward at a rapid pace, and fuel-efficient cars replacing our outdated gas-guzzlers is not a question of “if,” but of “when.”

You’ll have to make the switch eventually, and you’re only hurting yourself by putting it off. Don’t get left behind!

Here’s what you need to know before switching to a more fuel-efficient car:

Why Fuel-Efficient Vehicles Are Important

In case you’ve been living under a rock, the advantages of fuel-efficient cars over their fossil-fuel-loving counterparts are truly impressive. Here’s why the global shift towards fuel-efficient vehicle is so important:

There are new standards being set forth by the National Highway Traffic Safety Administration and the United States Congress that are meant to reduce strain on our fuel economy and to reduce the country’s dependency on foreign oil.

First enacted by Congress in 1975, the Corporate Average Fuel Economy (CAFE) was designed to reduce energy consumption by increasing the fuel economy of cars and light trucks. But over the next few years, the NHTSA is planning on increasing CAFE levels significantly, and to push hard against excessive fuel dependency within the U.S.

What’s that initiative mean for drivers on the road? It’s going to be increasingly difficult to meet the NHTSA’s standards for fuel efficiency, which will get the biggest gas-using cars and trucks off of the roads. That sounds like a pain (and it is) but it’s really for everyone’s benefit.

The initiative will save consumers money at the gas pump, reduce carbon emissions across the nation and cut down on city smog, lower gas prices by lowering the overall demand for gas thanks to fuel-efficient vehicles, and will slowly release the country from our reliance on foreign oil sources.

But you don’t need laws to tell you that it’s a smart choice to get a more fuel-efficient car now.

The Benefits of Fuel-Efficient Cars for Their Owners

As an added incentive to reach the goals listed above, the government is enticing consumers to make an earlier switch to fuel-efficient vehicles with benefits such as… 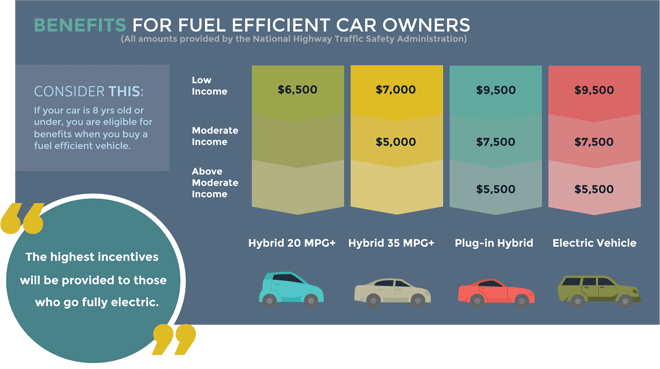 The Benefits of Fuel-Efficient Cars

If drivers fail to meet the NHTSA’s new standards of fuel efficiency, they could be facing fines and additional costs. So it’s in the best interest of car owners to take the plunge and get a fuel-efficient car now rather than waiting until they can’t afford to keep an expensive, fuel-inefficient car.

Besides the benefits provided by the government and the NHTSA, there are a number of personal benefits that fuel-efficient cars provide for their owners. The obvious perks include…

A reduction in your personal carbon footprint. Because recycling just isn’t enough.
Long-term cost benefits. The numbers are in; owners of fuel-efficient cars save thousands of dollars in the long run versus car owners who opt for a lower initial price tag but have to pay much, much more in gas and maintenance over the total lifetime of the car.
Gas-cost benefits. Because it deserves its own mention. You can go more than twice as far on a single tank of gas; saving you tons of time, and even more money. The gas cost benefits are the most immediately noticeable benefit from the time you drive your fuel-efficient car off the lot for the first time.

Yes, it’s incredibly cool to know that your personal carbon footprint has been significantly lowered with the purchase of a more fuel-efficient car. But the biggest personal gain for owners of a fuel-efficient vehicle? Money. Saving it, keeping it, and never having to spend so much on gas or maintenance again.

The Benefits of a Fuel-Efficient Society

We won’t be bound to other countries for the supply of oil for our cars. That means….

A 1998 report estimated that up to 24,000 people die prematurely each year in the UK as a direct result of air pollution.

Reductions in taxation on fuel costs and on fuel-inefficient vehicles that are still on the road long after they’ve become obsolete.

According to the most recent projections, Earth will pass the point of no return (a dramatic phrase, but still frighteningly accurate) in terms of environmental damage in the quickly approaching year of 2036. That’s just 20 years away.

So in addition to all the cost-saving and economic-boosting benefits of a fuel-efficient society populated by more energy-efficient vehicles, we all want to continue living on our planet for as long as possible, right?

Our immediate future and the futures of our children are at stake. Doing all that we can to slow down the clock is no longer optional; it’s necessary. Improved fuel efficiency is a great start in the right direction.

The Best Choices for Fuel-Efficient Cars

There are several choices when it comes to fuel-efficient vehicles. Some types of fuel-efficient cars run on natural gas or more efficient and environmentally-friendly fuel sources, there are compressed-air vehicles and more.

However, there are three most popular choices of fuel- -efficient car types on the market right now that typically sell more models than other types of fuel-efficient vehicles.

Hybrid cars do exactly what the name implies; they typically run on their electric battery as much as possible, and then seamlessly supplement it with biofuels when it needs to. The battery charges itself when the car is parked, going downhill, or otherwise not having to work as hard. There are some variations in the “hybrid” components, such as partly electric, partly hydrogen powered, etc. But they all work in a similar fashion.

Hybrid cars don’t offer the lowest amount of emissions put out, but they certainly offer a much more fuel-efficient alternative to traditional cars, and the cost of the car itself is earned back in fuel savings over a period of about five years. Most hybrid car owners are saving money in addition to helping to save the Earth!

Electric cars can also include fuel cell-powered hydrogen cars, plug-in hybrid cars, and more. But most models on the market feature the plug-in variety (although fully electric cars may be more financially accessible within a few years and become the best fuel-efficient car on the market… we’re looking at you, Tesla).

The Chevrolet Volt (a plug-in hybrid) and the Nissan Leaf (a fully electric) are two of the most popular types of electric cars on the market. While electric cars are the most fuel-efficient model of car on the road, the catch is that the battery still can’t hold a charge as long as consumers would like, and they’re more expensive than other fuel-efficient vehicles.

This may change soon, but for now, it’s a less viable option for consumers looking to purchase a more fuel-efficient car.

The most impressive part of the burgeoning technology associated with electric cars? They can offer a 99.9% reduction in CO2 emissions compared to an ICE (internal combustion engine, i.e. gasoline or diesel) car, depending on the source of electricity used to power the electric car.

The Hyundai Sonata is a great example of a car that can range from a plain old ICE with good fuel economy to a fully electric model that’s so efficient it qualifies you for a $4,919 federal tax rebate and can travel 27 all-electric miles and a 600-mile total range and there are four different fuel-efficient models in between the two, including a hybrid and plug-in version!

The car industry is realizing that consumers want to choose their level of fuel efficiency based on their budget and individual needs, so they’re offering a greater range of options when it comes to the slightly more conventional ICEs with better fuel economy.

Virtually every car company is looking for ways to create a more fuel-efficient ICE for consumers who can’t yet front the cash for a hybrid or electric car. For example, some are switching to biodiesel (a more environmentally safe alternative to traditional diesel), cars powered by natural gas, vegetable oil, or other forms of fuel efficiency.

Improved fuel economy is cited as one of the key elements that modern consumers look for when purchasing a car, and conventional car models are shifting to meet that demand in the wake of high gas prices and new standards for emissions.

The Most Fuel-Efficient Cars on the Market

The U.S. Department of Energy has released the list of 2016’s most fuel-efficient cars by size class. The smallest on the list is (unsurprisingly) those little two-seater electric smart cars. But those aren’t the most practical option for most consumers.

Among the compacts, the Fiat 500e runs a combined 112 miles per gallon, and the more spacious Volkswagen e-Golf gets 115 miles per gallon. One of the larger models on the list, the Kia Soul Electric has plenty of room and still gets 105 miles per gallon. It’s also currently one of the more popular picks among consumers for fuel-efficient vehicles.

The midsize station wagon Toyota Prius V was also featured on the list at 45 miles per gallon. True, the smaller cars tend to be more fuel-efficient, naturally. But that doesn’t mean that you can’t have space and still get more miles per gallon out of your environmentally-friendly car! There are plenty of models to choose from if you’re ready to improve your fuel efficiency, decrease the pollutants you emit, and save money in gas costs.

The Most Fuel-Efficient Cars

Check out the numbers:

Fuel-efficient car owners save $3,400-$5,000 over the lifetime of their vehicles

4 major car manufacturing companies anticipate having fuel cell vehicles on the market by 2015-2018 if they haven’t been producing them already.

Electric vehicle battery prices fell 40% since 2008. Car economy experts have predicted that longer-distance electric vehicles may be cost-competitive with combustion engine vehicles before the early 2020s.

Electric vehicle battery prices fell 40% since 2008. Car economy experts have predicted that longer-distance electric vehicles may be cost-competitive with combustion engine vehicles before the early 2020s.

← Professional Car Repair Services
How To Recondition a Car Battery and Other Batteries: Ultimate Guide →