This 2.4 petrol AWD was showing a message that the active stability control (ASC) needed servicing and the anti-lock braking system (ABS) light was on (pic 1).

The ASC function is Mitsubishi’s name for conventional traction control. It works by controlling the engine output in conjunction with the ABS.

Code C2116- ABS pump motor voltage low- was retrieved, but would not clear. Hard codes show a problem that is not intermittent, usually making it easier to locate the fault.

Powers and grounds at the module tested OK. This testing must be done with the circuit under load condition. The module is plugged in and the ignition is turned on so there is a load on the circuit (pic 2).

The ABS module unit was replaced. There was no other option because the C2116 code, plus the fact that the powers and grounds were correct, pointed to the ABS pump motor (pic 3).

With the car on level ground and the steering wheel pointing straight ahead, the scan tool calibrated the different parameters – the steering angle sensor, the G and yaw rate sensor and brake fluid pressure sensor.

The ABS light was gone but the ASC servicing message was still on the dash.

Code C2116 was gone, but there was now a new hard code U1417-Implausible data. A ‘U’ code demonstrates a communication problem, so the communication Bus lines had to be checked to ensure they were not shorted out or open or affected by a power loss.

All fuses checked out OK (pic 4). Now the CAN test breakaway box is used. After plugging it into the car’s data link connector (DLC} and waiting for the CAN Bus system to go to sleep, the resistance between terminal 6 and 14, which is the high speed CAN protocol, was checked. A short or a problem with one of the termination resistors was a possibility.

If one of the termination resistors was open circuit, instead of seeing the usual 60 ohms we would see 120 ohms. Our ohm meter was reading 61 ohms. Typically there should be 60 ohms of resistance .

By the way, if wish to extract fault codes from car’s ECU, we recommend a car scanner.

This can be tested only with a Bus that has gone to sleep. If it was awake the resistance would vary.

The PicoScope was hooked up to the high and low CAN lines of the high speed CAN terminals 6 and 14. There was no communication but there was a constant 2.5 V, indicating there was no short or open circuit.

But the problem persisted – why was there a recessive command, with both high and low lines remaining constant on 2.5 V?

The engine was running so there had to be some communication happening as well as all the other functions .

The ASC was the only component on the Bus line that was not working properly. 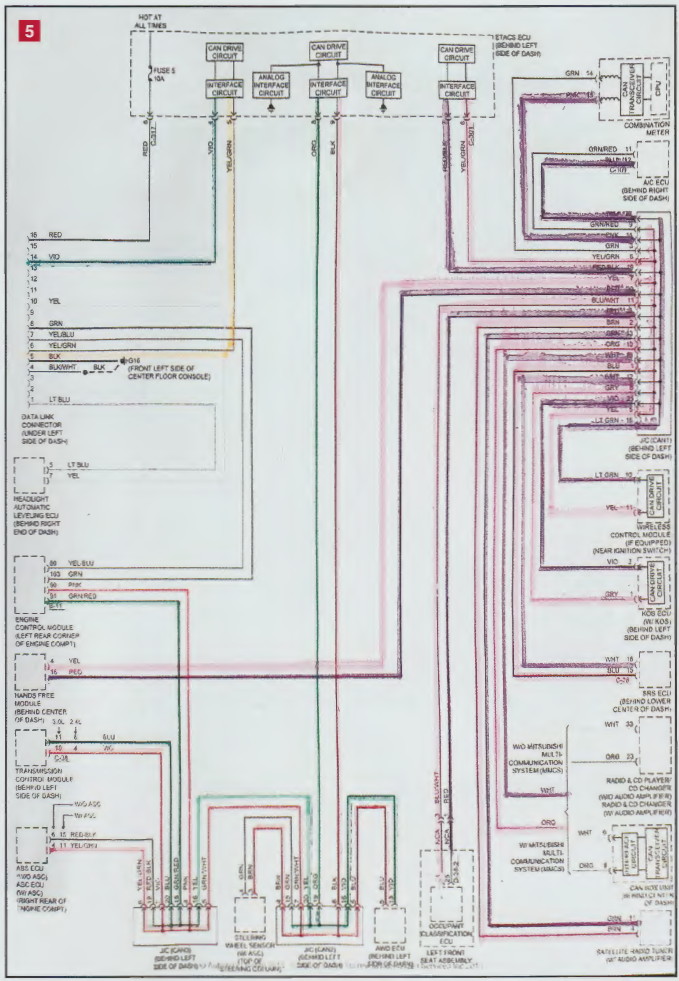 From the data that we were supplied, three separate communication circuits could be seen, all going into the electronic time and alarm control system (ETACS). This is Mitsubishi’s fancy name for a body control module that is part of an integrated fuse and relay box under dash on the left (pic 5).

The Bus lines at the ETACS module was checked for these three CAN Bus circuits.

Each circuit was scoped, revealing 2.5 V on both lines with no communication. These are, of course, the two lines that lead to the DTC terminals 6 and 14.

This confirmed there was now proper communication for the high speed CAN protocol.

It appeared that there must be different protocols in this vehicle (pic 6). At this stage the ETACS module was suspected.

Time to call a friend. Who else but The TaT Tech Team.

The first advice received confirmed that the ETACS was indeed the gateway and there were three different protocols.

The Bus lines going to the terminals 6 and 14 are the diagnostic CAN-C (diagnostic exclusive network) so it will only communicate when a scan tool is hooked up.

This explains the lack of communication. The next revelation was that the other circuit had a different protocol – CAN-B (middle-speed body network) CAN-B profile.

It was clear how these three CAN Bus lines on this Outlander are connected to each network. 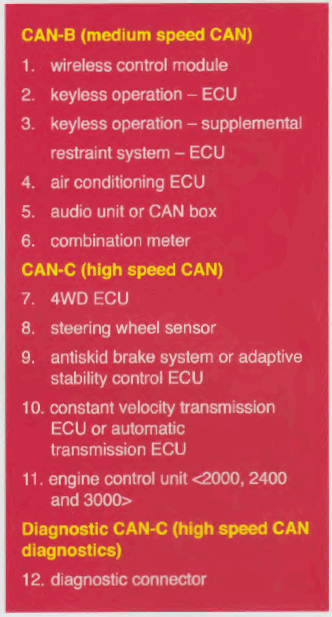 Although it was obvious that there was no problem with communication, there was still a communication error that was causing the ‘U’ code. So what had changed?

There were no ‘U’ codes prior to fitting the ASC/ABS module. If the old ASC/ABS module was plugged back in, the ‘U’ code would clear. The C2116 code returned, but that was to be expected.

It was proof that the U 1417 code was a direct result of the replacement module.

The numbers on the new module were different to the original module, indicating that the replacement was not compatible. With the correct replacement a month away out of Japan a secondhand complete unit was found (pic 7).

All the scan tool calibrations were carried out as before and the repair was successful. Secondhand units are not normally recommended for a safety system like ABS, but the owner had to make the decision to get the vehicle back on the road.

← The Reason Why Won’t My Diesel Begin?
Diesel Chip Tuning vs. Tuning Box →