The brake is one of the most important components of a car. Its primary function is to slow down and stop a car, thus the latter can never be considered complete or reliable without it. For worst cases, failure of the car brakes may lead to serious physical injuries or even death.

Fortunately, persistent advocacy of car safety procedures and principles have led to the development of other important automotive components, specifically with the brakes. In addition to the normal brakes, the anti-lock braking system (ABS) has been devised.

In this article, we will briefly discuss the basics of ABS, including how it works and how it differs to that of the normal brake. We will also enumerate the advantages and disadvantages of ABS, so we’ll know which one is better.

A brief note of the history of ABS

Such huge improvement to the system has led to the introduction of the traction control system (TCS) and the electronic stability control (ESC). Both of which utilize ABS equipment to transfer the braking control in between the wheels of the car. 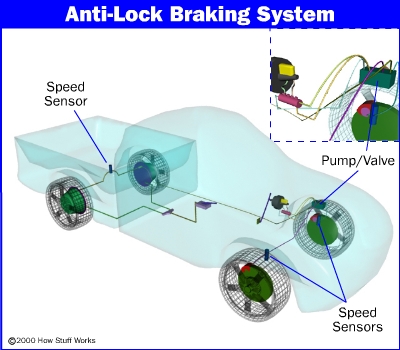 A normal brake basically involves pushing the brake pedal so that the clamps would hold tightly and eventually slow down a car. However, clamping the brakes too hard on a slippery road or surface may cause a car to lose traction and control. This is because the wheels get locked up and would slide freely over the road’s surface. To make matters worse, a driver won’t be able to steer a car when the tires are skidding, thus the likelihood of drivers getting into an accident is multiplied.

In order to prevent untoward incidents when making emergency stops, a technology called the anti-lock braking system (ABS) was introduced. While it may sound complex, ABS actually has a very simple theory behind it: It actuates brakes on and off automatically during emergency situations when brakes are used.

How does ABS exactly work?

Anti-lock brakes sense the movement of each of the car’s wheels. Whenever it finds out that a driver is “hard braking” due to an emergency stop, ABS acts quickly by rapidly pulsing the brakes hundreds of times per second. This mechanism enables tires to maintain traction, thus avoiding a car from getting into a skid.

To make the best out of anti-lock brakes, drivers would have to take note of a few important things:

1) When there’s a need to do an emergency stop, firmly depress the brake pedal.

2) Make sure to retain control of the car to effectively steer around obstacles.

3) Be conscious of the conditions of the road. It’s important to note that ABS may increase stopping distances on slippery or icy surfaces.

Advantages and disadvantages of ABS

While ABS has gone a long way to ultimately become a near requirement for every car, it still requires continuous improvement. Aside from the benefits it brings to drivers, it has some areas that require enhancements all for the safety and convenience of drivers.

Below, we’ll note down some advantages and disadvantages that require call to action:

Braking is a skill that should be practiced and perfected by any driver. While most cars right now are equipped with ABS to help drivers maintain control on wet or icy surfaces, it’s still important to take note of the basics of proper braking.

Some studies suggest that cars with ABS are less likely to be involved in accidents due to emergency stops. This is undoubtedly a very good news and, in fact, a cause of celebration for the people behind it.

However, the true benefits of ABS can only be realized when discipline and the proper techniques of driving are all incorporated.

As to which is better between ABS and non-ABS cars, the answer depends on the kind of situation that a driver is in and on his or her own liking. When used into its optimum, a car with ABS may have an advantage over a car that doesn’t have.

Still, it boils down onto what a driver thinks is fitting to his or her knowledge and driving techniques.

Which is better: ABS or non-ABS?
5 (100%) 4 votes
← Emissions Testing Is Part of Vehicle Maintenance
How to Tell if Your Car Speakers Are Blown →